So on July 11th I got a phone call from Thomas Pridgen referring me to a band called Mission Bells.  They would be coming along as opening support for The Memorials nation-wide tour.  I met with Micah later that evening and we talked through the tunes and the tour and all the logistics – seemed like it would be a pretty good fit, and strangely enough it landed right in the middle of a big open spot in my calendar between all my other traveling gigs.  The only part that would be tricky was that I already was leaving for the Bask Music Festival in Russian River – so that meant two rehearsals with the new band before I left for 5 days, then four rehearsals before our opening show.  At the time that seemed like a huge undertaking – but in truth by the second rehearsal after my return from the River I pretty much had the stuff down.

We opened the tour at Brick and Mortar in San Francisco – the crowd was fantastic!  After 5 days of festival and 4 days of rehearsing and trying to make all the arrangements for being gone for two months, I was exhausted.  I slept like crazy that night.

As of today we’ve been on the road for 8 days.  Our tour has been extended three more days from September 23 to September 26,  and we’re adding more shows wherever we can.

This is a fantastic group of musicians i’ve landed in – the Universe really has my back on this one.

Micah, Bren, Bryce, Nick and me – everyone is super good-natured and fun, easy to laugh.  All really good people and easy to work with, and we make some pretty kick-ass music together.  I’m having a blast. 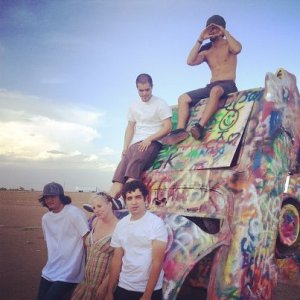 We’ve booked a recording studio while we’re in Austin, so we can work on some new tunes as well.  And we’re shooting video as we go along.  Thus far we’ve played SF, LA (at the legendary Troubadour), Las Vegas, Albuquerque, and tonight Denton, TX.

During my daydream time in the van (hours and hours and hours) I let myself daydream and am writing new songs and jotting down other song ideas for Sit Kitty Sit.  I already miss jamming with Mike and am looking forward to our mini tour out east when I get home followed by a kick ass homecoming show in November.  Hells yeah.  Being away from Mr. F and the kitties for so long is difficult, but we make sure to talk at least once a day if not more.

So for the next few weeks I’ll do my best to write updates from the road, hilarity has already ensued and I’ll save that for another post.
🙂