Kat Downs is a Musician, Artist, Teacher, Composer, and Performer originally from Green Bay, WI. She began studying music at age six and continued to major in music through high school and college earning a BA Degree in Music from St. Norbert College in DePere, WI.  Now living in the Santa Cruz mountains in California, Kat currently works on the Hard Piano Rock duo, Sit Kitty Sit, and a new experimental solo project simply called “Kat Downs”.  She is the staff composer for Wily West Productions and has an exclusive studio of piano and flute students. Best known for her intense piano playing style and exceptional lyrical compositions, Kat tours internationally and has shared the stage with such names as LP, The Memorials, Chris Wyse, En Esch, Mona Mur, Erica Dilanjian, Shannon Curfman, Lennon, Javier Mosley, and WASP.

The Longer, Not Resume-Friendly Version:

Hi – I’m Kat.  I’ve heard music in my head as far back as I can remember.  I was actually embarrassingly old before I realized that everyone wasn’t like that. (As in, “why do other musicians make a point of copying other musicians?  Why don’t they just write down the music in their…oh.  Awkward.)

My parents couldn’t keep me off my mom’s piano.  I think it drove my dad nuts so they eventually bought me a little organ for my room and when I was finally old enough to start lessons when I was six – off I went.

Music came as naturally to me as walking or eating.  It was pretty obvious that was my jam.  I started flute when they offered band in 4th grade and I shot to the top of the class with that as well.  Majored in flute through both high school and college – believe it or not, piano is my secondary instrument.  It didn’t stop there, either.  I naturally excelled at anything that had to do with creation.  From painting and drawing to writing and cooking.  From working with yarn and cloth to wood and metal.  Even other instruments. If I can make noise with it or art out of it just try and stop me. 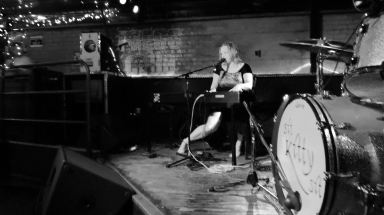 I didn’t really start trying to write songs until after college.  It took me a while to find myself as a writer/composer.  I was classically trained which basically means I was taught never to think for myself so much as interpret what “actual” composers meant.  So first I had to shake that off.  Even then I would get so sucked into the music theory and math that I hated what I would end up with.  It took a lot of journal writing and soul searching to finally learn to go back to what I started with – the music in my head.

I slowly learned to listen.  Just to listen to what’s in my head and then write it down.  It was excruciatingly slow at first.  Over the years it’s gotten easier, but there are still some songs that take forever.  Any given song could have taken 15 minutes to write, or a whole year.  I’m often surprised by what comes out.  Sometimes I have no idea for years what the lyrics even mean.  When I’m writing more consciously the inspiration comes mostly from life.  Mine, and those around me.  Now when I compose I write what I hear first and figure out all the music theory afterward.  It’s not efficient, but if I want the song to be “true” that is what works for me.  When I get stuck I switch to different art forms to get un-stuck.  Sometimes the creation of one song will also wield me a scarf, two new recipes, and a new blog.

My life changed in 2009 when a mutual friend suggested I ask Mike Thompson to fill in on drums for a one-time recording session.  We were total strangers but played together so naturally, it freaked us both out.  Then we didn’t speak for a few months.  Slightly less than a year later, in 2010, I asked him if he wanted to experiment with more piano/drum songs and maybe play some shows and boom – Sit Kitty Sit was born.  Fast forward to the point where it’s now my full-time job and Mike is my 100% partner in crime.  Crazy.  And I love it.

I’ve always been one of those people that never felt like she fit in.  Even when I was the popular kid.  Even when I was the loser.  I was just never really on my own two feet.  It wasn’t until Mike and I went out in the world with Sit Kitty Sit that I finally met my tribe.  The people that this music brought forward – music I wrote from deep in my heart – these were my people.  My family.  They are what continually inspires me to keep writing, performing, and branching out to try new things just simply by being themselves.

Thank you.  Endless amounts of thank yous.  For listening.  For loving.  For being inspirations to me.  For sharing your lives with me.  For asking me to participate in “big deal” moments with you.  For becoming my friends and my family all because of music.  I mean, is anything in the world more incredible than that?